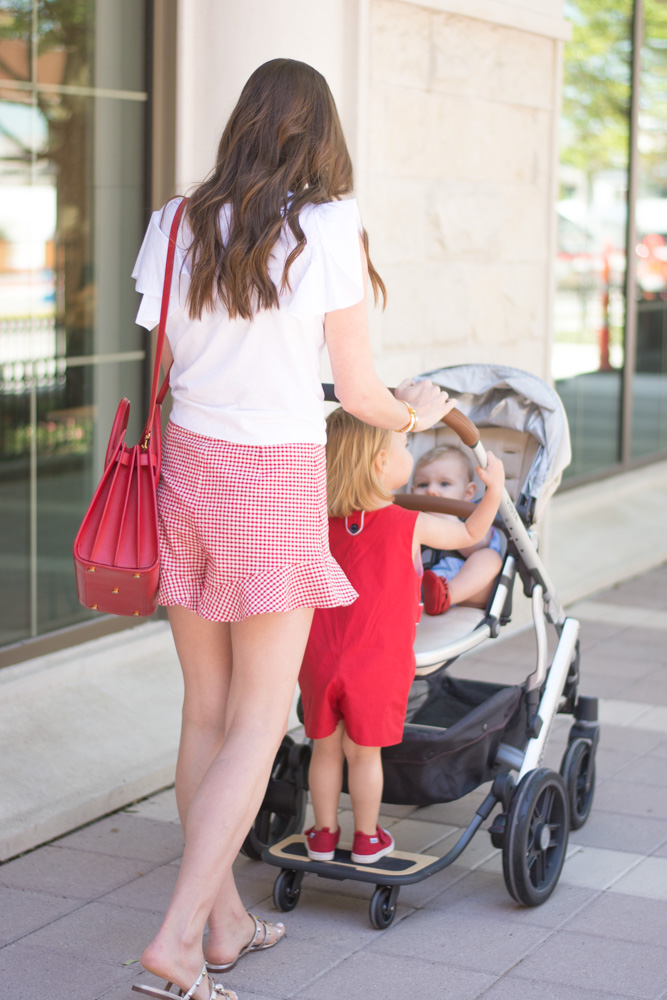 I’ll never forget trying to get William’s passport picture at 4 weeks old. His picture had to be taken with a white background, his eyes open and looking at the camera. He was so little. He just kept sleeping and when he was awake he wouldn’t look at the camera. As a first time mom, it was so stressful. We flew overseas when William was 8-weeks old and then we did it two more times in his first nine months of life. Looking back, the most stressful part of it was leading up to his first trip. There is a lot to get in order, anxiety around if your baby will be good in flight and all the unknowns. Once on the plane, it seemed (somewhat) easy. When babies are that age, they pretty much sleep the whole time. As they get older, it’s important to have activities for them to do and you just adapt as they grow. Now, we have two babies and are adjusting to traveling with two little ones; 6 month old Henry and two-year old William! Over the past six flights we’ve taken since Henry arrived, we have a few tips for flying with two kids and answers for some FAQs that many of you had! One on hand, traveling may seem easier now because when I nurse Henry, he falls asleep in my arms and I get a brief break while my husband is busy entertaining William 🙂

We would love to hear your tips for traveling with kids, too! Always looking for ideas to make travel go as smooth as possible!

Tips for Flying with Kids

I’ve always used our UPPAbaby for travel. William just turned two, so he still gets tired walking too far and honestly, I would rather just push the stroller than trying to keep everything/everyone together. Neither of my boys liked to be worn much either. Henry did for the first few months of life, and now I think I’d like to try an Ergo to see if he would still like it! Even if he did, I would stick to the double stroller for the airport/travel for now.

How do you travel with stroller – gate check or check at baggage? How do you arrange the car seat/rumble seat?

I have always gate checked our stroller. Usually my carry-on bag is heavier, so I just put that in the storage bin and can hold a coffee and push the stroller. My aunt and cousin gave us the travel bag (which insures that if anything happens to your stroller while traveling, UPPAbaby will fix or replace it), and I just break everything down at the gate. Since Henry arrived, I’ve always had his car seat on the upper adapters and the rumble seat on the bottom. We will travel with the MESA car seat until Henry outgrows it because it is just easier.

Do you check your car seats when going to a big city? Or do you use a car service that has car seats?

This is something I never thought about until William outgrew his infant car seat. Such a game changer! Do you rent a car and bring car seat? Do you take public transportation? Do you hire a car? We’ve done everything and I think each and every trip is unique and I always have a hard time deciding. Ultimately, if we are going to be in a big city where there is public transportation available, I would choose to not bring the convertible car seat. When we went to Boston, we left William’s car seat in Dallas and relied on public transportation the whole time. When we visited Nashville, we knew that we would be driving a lot, so I opted to check the convertible car seat and leave it installed in our rental car the whole time. On our last trip to Scottsdale, we booked a car service w/ car seat because we knew we weren’t leaving the resort. We’re heading to Europe this summer, so I am still trying to decide. We’ll have a rental car for part of the time, so I will most likely rent a car seat with the rental car. Honestly, this has been the hardest part of travel, lately!

Did you buy William a seat before he was two?

No. We took advantage of “flying for free under two” and we just bought his first ticket for last month’s trip. It was nice having the extra space, but he was in one of our laps the whole time!

How far ahead of your flight do you try to arrive at the airport?

We typically leave our house 2 hours before our flights leaves (we are about a 20 minute drive), park our car and and head through security. We have Global Entry/TSA Pre-Check which is well worth spending money on in our opinion!