Back to School for Pre-Schoolers

Shop Back to School for Pre-Schoolers: 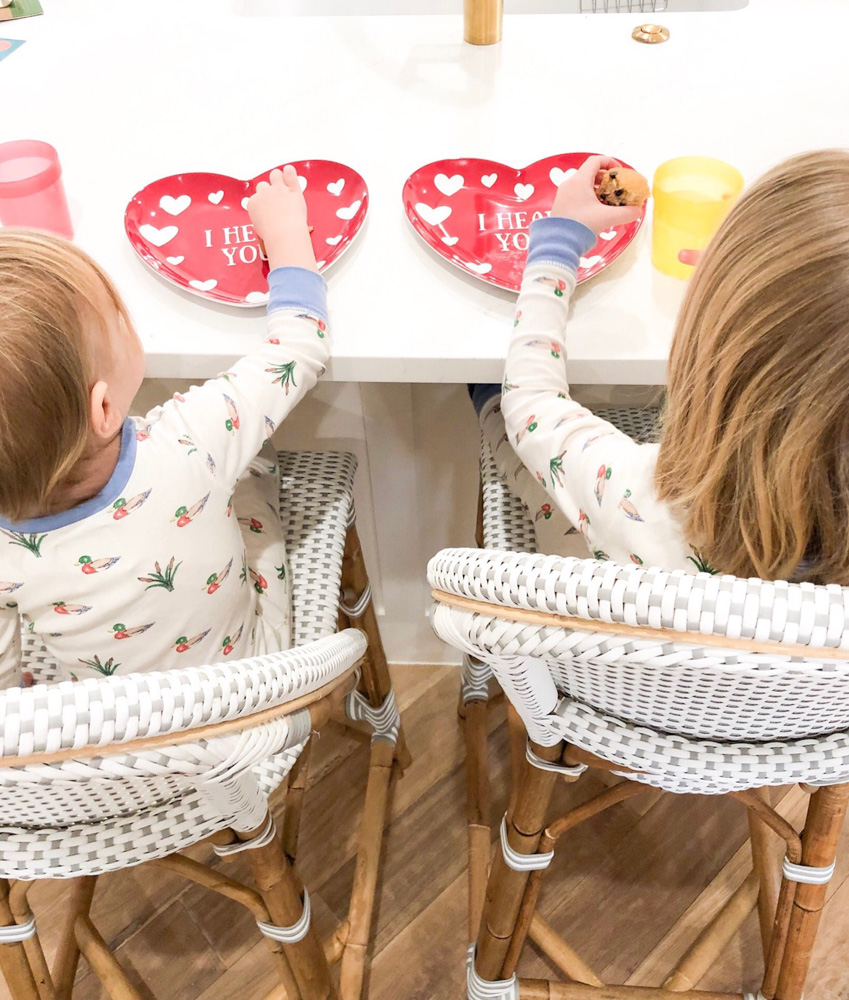 Valentine’s Day is just around the corner and we’ve been having so much fun getting ready with the boys. Having little ones around makes any holiday more fun and we have seriously never had more fun around Valentine’s Day! We wanted to share with you some of our favorite Valentine’s Day ideas for kids.

If you have a pre-schooler, get them involved in picking out Valentines for their classroom! William was very excited to go to Target to get Valentines for his class. He decided on heart shaped Annie’s gummies (his favorite) and cute little cards.

One of my favorite traditions on Valentine’s Day is making heart shaped pancakes in the morning. We started this tradition when William was one. We use heart shaped molds for the pancakes and how cute are these heart plates? If you have a little baker in your family, this heart apron is too cute.

My love language is gifts, so I love to have little gifts and surprises for the boys, but especially on holidays. My mom used to do the same for my brother and me and I am happy to carry on the tradition! On Valentine’s Day morning, I usually pick up a balloon for each boys’ chair and have a little present for them. I haven’t 100% decided on what to get them this year, but I’m thinking a new pair of their summer shoes, some pajamas and a little toy. Since the weather’s been nice the past few days, we’ve spent a lot of time outside playing with chalk so I may just do that!

Do Something Nice for Someone They Love

I always want the boys to think of others, so last year they (more like William, since Henry was 5 months old) picked someone they wanted to do something nice for. William picked Gigi and he wanted to bring her pink flowers because that’s her favorite color. This is when they dropped off Gigi’s flowers last year. I can’t wait to see what they come up with this year!

My kids get so excited for Christmas pajamas, and I think Valentine’s Day pajamas are just as fun. They don’t have to have hearts all over them either! These tulip pajamas are adorable for girls and how cute are these striped ones for boys? For a Valentine’s Day outfit to wear to school – this train set for him and this sweet dress for her!

William is at the age that he understands special occasions, while Henry is just beginning to get it. To give them a chance to participate, we love to add some home decor that expands on the celebration. This year we picked up some tassel garlands and heart garlands, pink velvet throw pillows and oversized sherpa heart pillows. The boys love it all. William especially loves the heart pillows and thinks that they’re especially for him.

Bake/make a special treat to have after dinner

William and Henry love to help in the kitchen, so one of our Valentine’s Day ideas is to make or bake a treat together. The boys are too young for anything very complicated or time consuming, so making up a special batch of Rice Krispie treats is the perfect project. We are planning to use the pink Valentine’s Day marshmallows that are in the store now and adding Valentine’s Day sprinkles, cutting them in heart shapes when we’re done. We can break this up into a few different steps so they won’t get bored and it will be more fun! 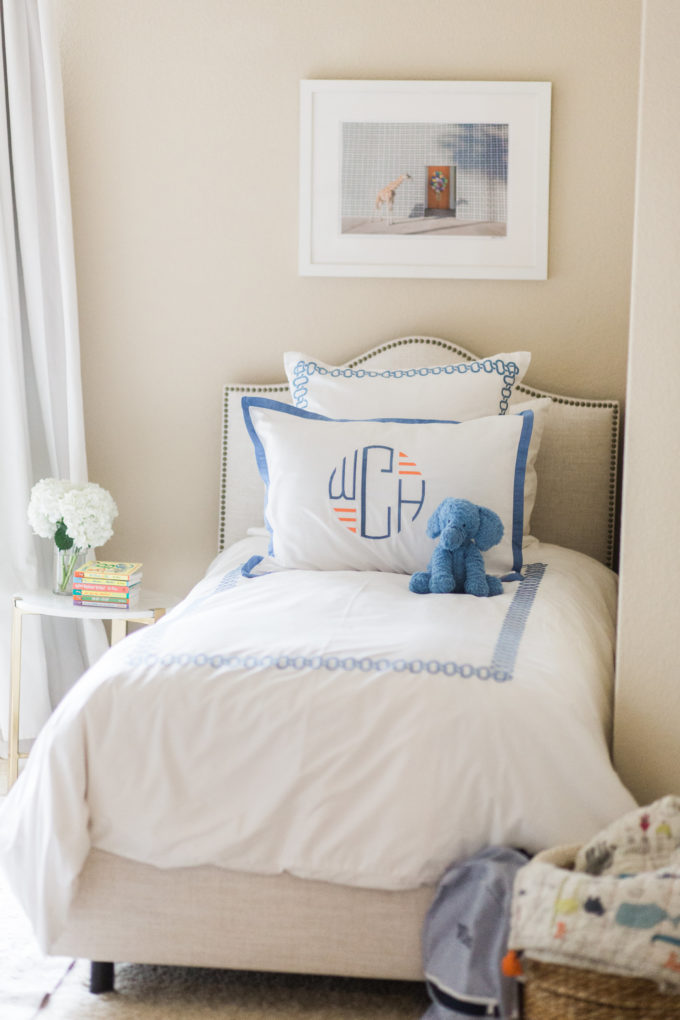 This post has been a long time coming! Last summer we set up William’s toddler bed in anticipation of Henry’s arrival in September. William was so interested, wanting to help us put it together and picking the perfect spot for his “big boy” bed. We talked about it a lot, but he never wanted to sleep in it. He was so cozy in his crib and we had space for Henry in our master bedroom so we went with it. Fast forward almost a year later and William finally told me he was ready for his big boy bed! In April, we had talked about how this summer he may be ready for his big boy bed and the day after his last day of pre-school, he woke up and told me “Momma, William ready for big boy bed”. The fact that he was ready is 100% why this transition went smoothly for us. I am pretty sure that it would have been a much harder transition had we tried to force it last summer. We have so much going on this summer; William moving to his big boy bed, a big trip to London and Portugal, planning to potty train following our return and moving to our new house. I really wanted to space out these big changes for William, so I’m glad we have this one knocked out! This is what worked best for us, but would love to hear any of your tips, too!

Transitioning to a Big Boy Bed

No. 1) Wait until they are ready

Hands down, this is the most important thing we did. It wasn’t ideal at all – considering Henry is still sleeping in our room, but it made it the smoothest transition for William. I didn’t want to make him afraid of going to sleep, or not feel secure after taking him out of the safety net of his crib. He slept so well in there, which is also why I didn’t want to push him. But when he decided he was ready, he was really ready!

No. 2) Read books and point out pictures of kids in the big bed

When reading books, I would always point out or read that “Paddington”, or whichever character, was going to bed in a” big boy bed”, etc. We talked a lot about him one day moving to his “big boy bed” and I think it helped William to know that would eventually be him one day.

No. 3) Invest in a nighttime light

A few friends had recommended getting a light that would switch colors to signal to William when it’s okay to get out of bed. I ordered the Hatch Baby light from Amazon and that was half the fun for William in getting set up for his new bed. He picked a color (yellow) for when he was to stay in bed/sleep and then a color (blue) for when it’s time to get up. It plays white noise and you can adjust the color/noise from an app on your iPhone. This has been the best thing to keep William in bed during the night and during naps. He gets so excited when he’s ready to get up and the light turns to blue.

William is in a twin bed, so rails were necessary because he is such a wild sleeper. They are definetly not pretty, but they make him feel safe and secure. I ordered them on Amazon and will keep them on for as long as he wants them.

Moving to a toddler bed is such a milestone and we like to celebrate everything in our family. To celebrate the occasion William got to pick out something special to have when he woke up that first morning. He’s is very into floor puzzles right now, so the night before he stayed in his bed for the first time we had him pick out a new puzzle on Amazon that he could open after the first night in his big boy bed.

No. 6) Be prepared for a few weeks to transition

William has been in his bed for a month now. We were at home most of that time, which helped make the transition smoother. He does not want to sleep in a crib or pack n’ play while we are traveling now, so I learned that I need to be flexible with our sleeping arrangements. When we were in Del Mar, I just put some pillows along the side of the mattress and covered the pillows with a sheet so he wouldn’t roll right off. 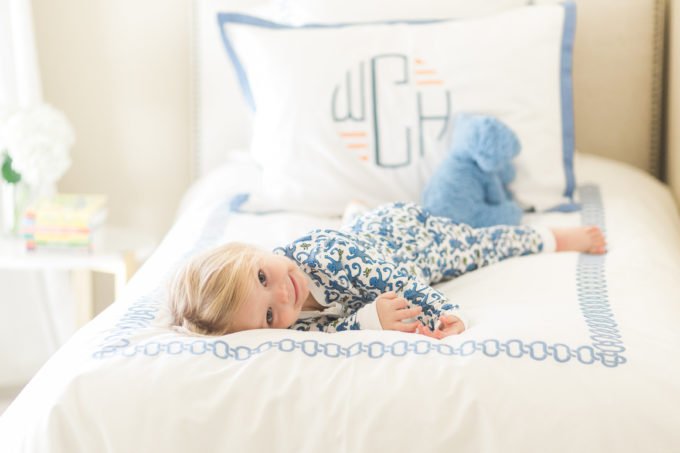 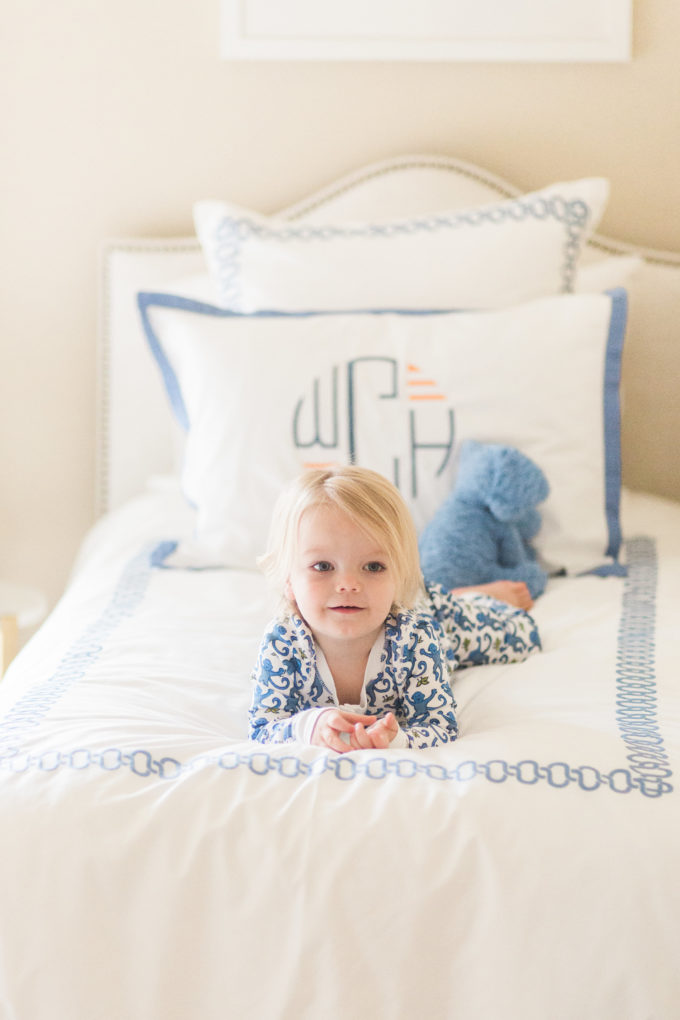